Hello, my name is Jimmy!

Part one of Jimmy's story.

Jimmy is a young man from The Republic of the Gambia. He studied at the University of The Gambia and is now pursuing a PhD at Vrije Universiteit Brussel (VUB) in Belgium.

As a student, Jimmy attended the University of the Gambia, where he did his undergraduate in Development Studies and a Masters in African History.

This University of The Gambia was founded in 1999 and is the only public university in The Gambia with a student population of about 5000. The university has four main campuses (Banjul the capital city, Kanifing the administrative center, Brikama in the West coast region and Faraba the main campus, which is still under construction).

In 2016, Jimmy travelled to Belgium. Here, at the VUB, he obtained his second Master degree in Linguistics and Literary Studies. Then he continued to pursue a PhD in Political Science by focusing on Democratization in Africa: A Case Study of The Gambia's Democratic Change in 2016 Presidential Election. 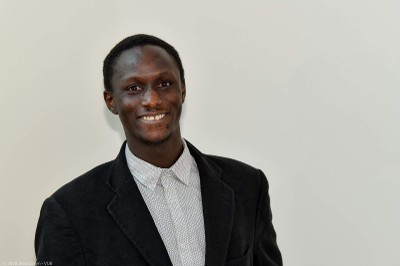 Both universities, UTG and VUB, established a partnership in 2018. This is also where Close the Gap enters the story. The International Relations Office of the VUB offered internship support for a number of VUB Computer Sience students to travel to The Gambia to install computers in classrooms of the UTG. These computers were all provided by Close the Gap.

At the beginning of July 2019 four VUB students, accompanied by Jimmy, went to the University of The Gambia. Their purpose was to install the 250 computers and 150 laptops. About 150 computers would be installed in computer classrooms for the Computer Science students of the UTG. Others were meant for the academic and administrative staff. Another 30 computers were installed in the newly established VUB-UTG Hub (e-library & research centre), situated at the Kainfing campus.

In the second part of Jimmy’s story, we will discover his on the ground experience with the four VUB interns that joined him on his trip to his University in the Gambia.

Part one of Jimmy's story